Celibacy, Sermon-Dowloads and "Problems" with Minorities - Cardinal Marx at Stanford

One thing I will for sure miss being back in the working world will be the constant flow of decision-makers, thought leaders and influencers that I get to listen to while here at Stanford. Today I had the honor to join a discussion with Cardinal Reinhard Marx. Cardinal Marx is one of the most influential figures of the Catholic church as he was selected by Pope Francis as one of nine Cardinals to help the Pope reform the Catholic church. Cardinal Marx is also leading the German Bishops Conference and oversees the Secretariat for the Economy for the church. 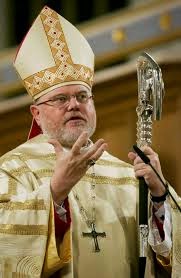 I asked the Cardinal how three things he would want to change about the church:

He gave the example that for point (3) many priests print out sermons they find online and just give those instead of writing their own. To be honest, I found it quite charming that even members of the church seem to sometimes take shortcuts. It's kind of like: "Reinhard can you send me this slide, I don't want to build it myself". Also the fact that a lot of priests know how to use the internet is promising to me.

Regarding point (1) I was somewhat offended when the Cardinal mentioned that not only the Western World has "those problems" (and with that meaning homosexuals and women), but also developing countries. I hope his phrasing is due to is imperfect English. I am not sure though.

Besides the content of his arguments I found it interesting that he very rarely evoked emotion or spirituality, but was very statesmen-like. The CEO of Mastercard or Christine Lagarde sounded pretty similar. A Catholic classmate was actually disappointed about the lack of faith-related messages. I, on the other hand, found the Cardinal fairly easy to follow and not too up-in-the-air.

Unintentionally the Cardinal actually got some laughs. When talking about the universal application of rules he said:

"We have to have celibacy everywhere. Imagine we don't have it in Africa for example. Then every priest would go there."

Especially at the end I felt rather uneasy though. He placed his hands on some students and blessed them murmuring Latin phrases. It is just so far away from the things we are exposed here. So far away from technology companies, so far away from search funds and so far away from financial modeling. I am amazed by the fact that a group oddly dressed up men who repeat certain phrases in Latin can have such power. A group of men that calls minorities "problems", that cannot have sex and that clearly does not promote gender equality in their organization.

Taking a picture he sat down next to me and we had a quick chat for five minutes. He asked about my studies and what I want to do afterwards. We also talked about the self-selection of people from strong socio-economic backgrounds at places like Stanford and how different this is from Germany. It was like talking to any German politician or business-man and not like talking to one of the most influential members of that add group describes above
.

A lot to think about.